Does Heart Disease run in your family?
Do the shape of your earlobes indicate a greater risk?!

Most people are very well aware of the correlation of high cholesterol, high blood pressure, obesity, etc.. but ear creases?!

It is always the goal to find early signs or indicators that can save time and give us a chance to take action to correct risk factors.

To the surprise of many people, earlobe creases (ELC) may indicate coronary artery disease (CAD). It is fascinating. 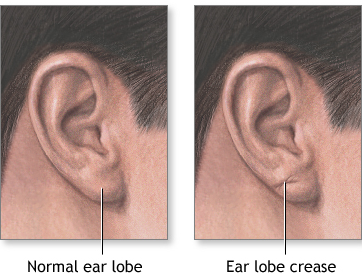 The correlation between Ear Lobe Crease and Coronary Artery Disease was first described by Frank, ST in 1973, in the New England Journal of Medicine. He found that people with the ELC (19 out 0f 20 people) had at least one risk factor for CAD.

The possible association between ear lobe creases and coronary artery disease garnered attention when a study by Dr. William Elliott was published in The American Journal of Medicine more than a decade ago. Results of his study indicated that 19 out of 20 people with risk factors for coronary artery disease also had diagonally creased earlobes.

These numbers are very significant for such an easy, noninvasive “test” for CAD. The creases usually don’t appear until later in life and the reason for their appearance is still unknown, although there has been speculation.

One such cause of the crease is this. The ear lobe is richly vascularized, and a decrease in blood flow over an extended period of time is believed to result in collapse of the vascular bed. This leads to formation of the diagonal crease.

This makes some sense since it is now known that CAD is more of a disease of the inside of the arteries and not a cholesterol dysfunction.

Could it be that ELC are a better indicator of CAD than Cholesterol levels?  Remember, half of all people that suffer a heart attack had normal cholesterol numbers. Huh.

An article published in the 1996 American Journal Of Medicine stated that ear lobe creases were shown to be associated with higher rates of cardiac events, in a study of 264 consecutive patients.

Over 50 subsequent studies have been reported in the medical literature, with the largest involving 1,000 unselected patients.

Although the research of the literature on ELC and CAD was quite revealing, it must be emphasized that an individual should be knowledgeable of all the risk factors that may contribute to or be linked to heart disease.

Did you notice that High Cholesterol is not on the list? Note, I don’t think cholesterol is ‘The’ factor, but I think it goes along with telling the story of your blood factors, so it should be evaluated.

A review of the medical research strongly documents the need for all individuals suspected of having heart disease to be thoroughly evaluated.

If you have been evaluated and been told that your cholesterol and blood pressure were within acceptable limits, you may get a false sense of security. When in reality, you may be on the brink of a heart attack or stroke.
Cardiovascular disease claims as many lives as the next 8 leading causes of death combined, including cancer, accidents and AIDS. No other modern illness comes close to reaping such a grim toll on human life.

Considering that heart disease is the number one killer in America today, we need to go as far to say that the following “cardiovascular markers” be part of a routine laboratory evaluation.

But, remember those ELCs and take a look to see if they run in your family and if they do, take note whether Coronary Heart Disease runs in the family also.

That would be a good reason to then check the markers above.

Share with those you care about.
Cheers and good health, Dr. Bill!