This family man of 44 years of age is concerned about his family history of Cardiovascular Disease.

His father, 2 uncles and his grandfather all had heart attacks at a young age.  His aunt and his mom both had strokes.

That’s a family history to take notice of.  His doctor already recommended cholesterol medication for him and told him to stop eating meat and saturated fat.

His cholesterol numbers were higher when I tested him, but that wasn’t what I was so concerned about.  He was not overweight and he exercised 3 times a week.

Stop here.  His cholesterol number was the only thing that his doctor was looking at in regards to his Cardiovascular Risk.

The cholesterol medication was supposed to address that to the satisfaction of his doctor and the case would have been considered solved.  This would have been chalked up as a good resolution to a concerning patient encounter.

Let’s look at a snapshot of his blood work and then look at it through the eyes of Functional Medicine as well as Prevention of Heart Attack and Stroke. 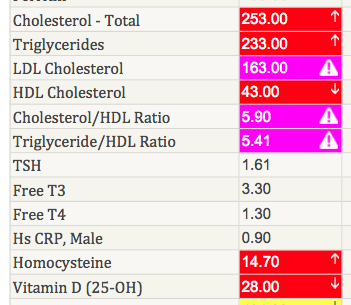 And would the medication get it down?  Probably.  But, are we missing the real problem causing us to be concerned about his risk and possible future of Cardiovascular Disease?

It is being missed completely!

I am concerned about his really high Triglycerides at 233, they should be below 100, and the Ratio of his Triglycerides/HDL.  At 5.41, this is way too high and should be below 2.0, to be ideal.  This points to the fact that he is probably Insulin Resistant and needs to eat a lower Carbohydrate Diet.

By the way, cholesterol medication does not effectively lower Triglycerides.

The actual test that I was most concerned about was his Homocysteine, which is high at 14.7 and should be below 6.0.  So what, right?!

Well, Homocysteine has been named as one of the real culprits when it comes to arterial wall damage and the cause of Cholesterol deposits.

What? The actual reason for blood vessel damage and the waxy cholesterol deposits is going ignored?!

Yes, in fact it wasn’t even tested for.   Homocysteine is rarely tested for in people with a high risk for CVD.  Why?  Because they don’t have a medication yet that lowers it.

Of note also is his hsCRP of 0.90, which is lower which indicates low amounts of inflammation in the body which also leads to cholesterol deposits.

His Vitamin D levels were a bit low at 28.0 and out of the Optimal of 50-90 for preventing many cancers.

See how important the proper blood work is in determining risks for dysfunction which leads to disease?  It is also important to view each lab test through the lens of Functional Medicine which uses narrower ranges of Optimal Values.

Who doesn’t want to be Optimal when it comes to your health?

By the way, as important as Homocysteine is in determining possible CVD risk (both Heart Attack and Stroke), it is also relatively easy to get down by using good vitamin therapy.

You see, each one of us is Biochemically unique.  It is important to do the right tests and just as important to read them correctly.

I think his wife and children are glad that we took a closer look.